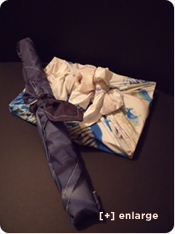 it happens every year, whether you celebrate Christmas, Hanukkah, Kwanzaa or Festivus, you are likely to get and give a gift or two. With the gifts also generally comes the wrapping, either wrapping paper or a decorative bag that you have to throw away or only re-use a few more times before it has to be tossed. What's a body to do when you don't want to waste all that paper?

Furoshiki are traditional Japanese wrapping cloths used to transport clothes, gifts, or other goods. The name furoshiki means "bath spread", as in the 1600s they were used to bundle clothes while visiting public bath houses. Eventually, the furoshiki became popular for merchants to transport their wares or to protect and decorate a gift. 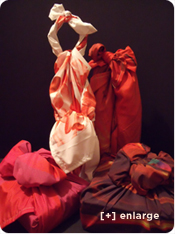 Modern furoshiki are made of a variety of fabric types, including silk, cotton, rayon, and synthetics. Furoshiki are often decorated with traditional designs or by Shibori, a traditional Japanese type of tie-dye. There is no set size for furoshiki, they range from hand sized to larger than bed-sheets but most common sizes are between 17" and 45" square.

Although there are still furoshiki users in Japan, their use declined after WWII due to the introduction of plastic bags. Recently renewed interest has grown as environmental protection has became a concern. Today in Japan furoshiki are most commonly used to wrap and transport bento style lunch boxes and as picnic mats when eating outside. 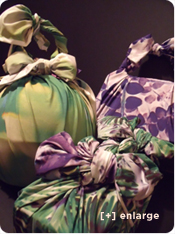 In Japan, it is considered impolite to offer a gift directly by hand so the furoshiki serves a useful purpose in an attractive manner. Etiquette is a serious thing in Japan, and there is a debate on whether a gift wrapped in a furoshiki might be interpreted that the receiving party is then expected to reciprocate with a return gift wrapped in the original furoshiki. Then there are those who suggest the furoshiki should be considered part of the gift. In the US it is generally considered part of the gift and can sometimes be used as a scarf or bandana.

According to Japan's Environment Ministry, by not using one plastic bag, about 61 grams of polluting carbon dioxide is prevented from further degrading our breathing air! 30 billion plastic bags are annually used in Japan while here in the US Americans use about 90 billion plastic bags a year. Foregoing the use of plastic bags for daily shopping and gift giving could go a long way to reducing the waste.

So instead of bags of wrapping paper you have to throw away, get everyone together and try making your own tie-dye, stamped, stenciled, screen printed, or otherwise decorated, furoshiki. Check out our tutorial on an easy kid-friendly furoshiki project.

Ways To Use Furoshiki (pdf)