...Nylon was created in the 1930's as a synthetic replacement for silk and substituted for it in many different products after silk became scarce during World War II? It replaced silk in military applications such as parachutes and flak vests, and was used in many types of vehicle tires.

In 1931, DuPont started to manufacture neoprene, a synthetic rubber created by Carothers' lab. The research team then turned their efforts towards a synthetic fiber that could replace silk. Japan was the United States' main source of silk, and trade relations between the two countries were breaking apart.

By 1934, Wallace Carothers had made significant steps toward creating a synthetic silk by combining the chemicals amine, hexamethylene diamine and adipic acid to create a new fiber formed by the polymerizing process and known as a condensation reaction. Polymers are any of a class of natural or synthetic substances composed of very large molecules called macromolecules that are multiples of simpler chemical units called monomers. Polymers make up many of the materials in living organisms, including, for example, proteins, cellulose, nucleic acids, natural rubber and silk. Those synthesized in the laboratory have led to such commercially important products as plastics, synthetic fibers and synthetic rubber. 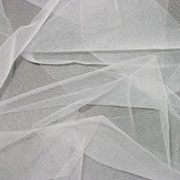 DuPont patented the new fiber as "nylon" in 1938. Nylon was first used for fishing line, surgical sutures, and toothbrush bristles. DuPont touted its new fiber as being "as strong as steel, as fine as a spider's web," and first announced and demonstrated nylon and nylon stockings to the American public at the 1939 New York World's Fair.

The technology has not stopped evolving and scientist are still working on ways to improve this fantastic fabric. Nearly a century later Nylon is still the second most used synthetic fiber in the United States. What we at Dharma love about Nylon is that it is the only truly synthetic commercially popular fabric that because of it's molecular similarities can be dyed with the same dyes as silk and wool, making it a great, inexpensive substitute for outdoor fabric applications that would be less than ideal for silk. Think banners, flags and wind socks!! Woo-hoo!